PR is Truly a Matter of Biblical Proportions 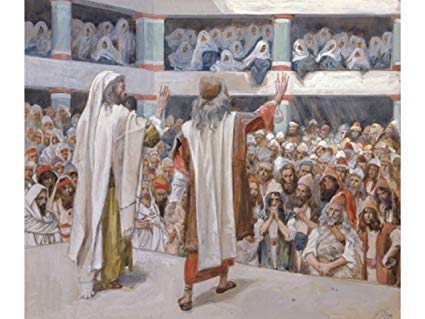 You may know Moses from Sunday school, or from Michelangelo’s brilliant painting on the ceiling of the Sistine Chapel (one of the most familiar masterpieces of the art world), or as Charlton Heston with a skunk stripe in his hair and supposedly stone tablets in his arms in The Ten Commandments. He is a ﬁgure of titanic importance in Judaism and Christianity, a man chosen by God to lead an oppressed people out of slavery into freedom. In the Bible, he is the Old Testament ﬁgure most mentioned in the New Testament; in the Quran, his name turns up more than anybody else’s— including Muhammad’s.

We’re not going over any of this for religious purposes. We’re interested in the historical weight of the man. He was, after all, depicted on the ﬁrst seal of the United States by Founding Fathers John Adams, Thomas Jeﬀerson and Benjamin Franklin— the guys who wrote the Declaration of Independence! And among the many titles Moses has been given by posterity—Deliverer, Prophet, Lawgiver—we must add one: First PR Client.

That’s because Moses, for all the leadership qualities that got him chosen by God to lead the Israelites to the Promised Land, knew there was one thing he could not do by himself: He didn’t trust his ability to speak to the people he was called to lead in a way that would marshal them to action. By the biblical account, Moses is commissioned by the Almighty in Exodus Chapter 4. He immediately begins to muse aloud about whether he’s up for the task, prompting God to show him a couple of miracles sure to get the people’s attention: turning his shepherd’s staﬀ into a snake then back again and giving him leprosy of the hand that He cures by having Moses slip it under his cloak. God even promises a third miracle if the ﬁrst two don’t cut it with the masses: If Moses pours water from the Nile on the ground before them, it will turn into blood.

But Moses still waffles. All the signs and wonders in the world, he sheepishly tells God, will not help him overcome his ineloquence, a condition he describes in Verse 10 as “being slow of speech and tongue.” He goes so far as to try to beg oﬀ the assignment altogether. He asks God to select someone else for what was, at the time, at least equal to Noah’s building and piloting of the ark as literally the most important job in history. That’s how certain Moses was that his communication skills weren’t up to snuﬀ , and that communication skills were going to be a major part of the uprooting and transplantation of more than a million men, women and children out of Egypt and into Canaan.

“What about your brother, Aaron? I know he can speak well,” God says in Chapter 4, Verse 14. “You shall speak to him and put words in his mouth.”

We’re already running the risk of this becoming a theology lesson, so we’ll speed up the narrative here. Aaron starts by going with his brother to the Israelites and sharing God’s plan for their deliverance. The arrangement works well: The people catch the vision for leaving under Moses’ leadership; Aaron helps Moses make increasingly compelling cases to Pharaoh about why he should “let their people go” (side note: it’s not the PR person’s fault if the audience doesn’t grasp the importance of the message, which in this case was, “You will suﬀ er under plagues of, among other things, hail, locusts, darkness, frogs, boils and the death of everybody’s ﬁrst-born child”); and the Exodus gets under way, including the perilous parting of and passage through the Red Sea.

Two instances of Aaron’s value as Moses’ PR representative are worth singling out. In the ﬁ rst, the Israelites are gett ing testy because they’re hungry—actually complaining about how good their stomachs had it as slaves. So Moses tells Aaron to let them know God has heard their grumbling. The Lord’s response? He will present them with nutritional provisions nightly in the form of quail that ﬂy in and a honey wafer called manna that will be deposited literally from heaven. In the second instance, the wanderers are attacked by the desert tribesmen whose land they’re passing through; Moses leads the ﬁght by standing on a rock and raising his hands above his head as a sign of reliance on God. As long as his hands are aloft, the Israelites are winning. But when his arms get tired and drop to his side as the skirmish drags on, Aaron and another of Moses’ lieutenants have to prop them up to ensure victory.

Alas, Aaron is not destined to keep his PR job throughout the journey—which may or may not be why it takes the group 40 years to get where it’s going. Moses basically reassigns his big brother to another role—as one of the community’s priests. Why? Maybe he was emboldened by the initial successes of the arrangement, perhaps thinking he’d learned enough to go it alone delivering God’s messages to the people. What isn’t in doubt is the disastrous outcome of the decision. Episode after episode follows in which Moses, who ﬁ rst exhibits his hair-trigger temper when he kills a slave master all the way back in Exodus 2, gets in arguments with the people. Aaron, perhaps distraught at losing his communications responsibilities, engages in a little blasphemous behavior of his own. The entire ebb and ﬂ ow of the brothers’ story ends where it began: standing in front of the people Moses has been called to lead, needing to communicate and carry out an important message from God. It goes as badly as it possibly could.

All Moses needs to do, per God’s instruction, is call water out from a rock to quench the thirst of the yet-again bellyaching Israelites. Aaron is standing beside his brother, but says nothing and does less, as Moses ignores God’s instructions. He doesn’t call water from the rock but smacks it instead with his staﬀ . That does, indeed, produce the promised water—but also brings grave consequences for our fraternal heroes. They will be allowed to complete the duty of leading the people to the Promised Land, but they are personally forbidden from entering. Moses and Aaron die without ever having stepped sandal in Canaan, never able to enjoy the fruits of their labor.

See how high the stakes can be in the PR game? You might even say wisely leveraging expectations and opportunities—my deﬁnition of eﬀective PR from the introduction—is a matter of biblical importance.

— Excerpted from BITE THE DOG: Build a PR Strategy to Make News That Matters, by Gary Schneeberger